The Apples in Stereo’s leader Robert Schneider explains why non-standard harmonics are like avocados, among other revelations 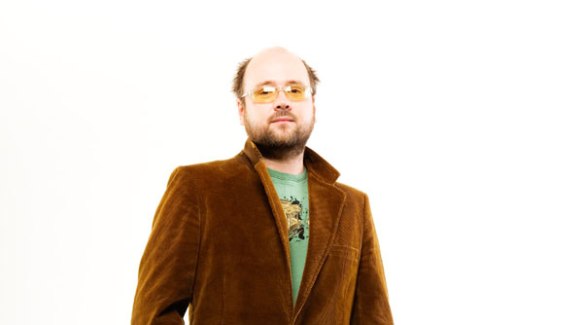 Lovers of sweet, sweet pop music, take note: the singer/songwriter/main creative force of The Apples In Stereo, Mr Robert Scheinder, is on his way to Australia and will be doing some intimate solo shows while he’s here. This is a major cause for celebration as Schneider’s one of the greatest writers of melodic, harmony-drenched guitar pop on the planet (as the new Apples Best Of, #1 Hits Explosion, makes more than clear). However, that’s not the only reason he’s coming to our nation. He’s one of the guests of Queensland’s Big Sound music conference, where he’ll be imparting wisdom to the next generation of young musicians and producers. Not that he’s actually thought it through at this point…

“Oh my goodness. Oh my gosh. I have no idea,” he responds with machine-gun pace when asked what he’ll be talking about. “I don’t think I have any wisdom to impart.  Maybe I could tell you how to mike a snare drum or something like that. Um, I don’t know. I haven’t really planned anything out exactly in that way. I just thought I would let the spirit of pop music speak through me for a short time. I mean I’ve spoken at some maths conferences and stuff like that, but I do like public speaking and stuff. I guess it’s just not a particularly well planned out sort of thing.”

Yes, aside from all things musical, Schneider’s a total maths nerd. How many other indie pop musicians can you think of who’ve developed an entire musical scale based on logarithms? The scale made its debut on some interludes on 2007’s superb New Magnetic Wonder, as well as creating a strange, unnatural-sounding chime intro to ‘Can You Feel It?’, which begs the question: since the scale sounds so “wrong” to most people’s ears, how on earth does a melodic pop nut like Schneider even think in those terms?

“It was hard for me to write in such a strange scale,” he admits. “It makes my brain feel like it’s twisting in my head, but I really like that feeling. On the new Apples record that we’re working on, I’ve just finished a song where a lot of the chord progressions are in both regular scale and the logarithmic scale, but the solo sections are played in the logarithmic scale.”

He pauses for a second for breath. “I called it a ‘non-Pythagorean scale’, though, but that’s just because I thought ‘logarithmic’ sounded kind of cold. It’s something that seems so futuristic. Often when you say futuristic you get kind of a cold feeling, but in reality one would like to imagine that the future will be very warm – not in a global warming kind of way, of course. I mean more emotionally warm.”

As to where his interest in experimental music comes from, he credits “my friend Jim Mcintyre [Apples co-founder and leader of Olivia Tremor Control] and Jeff Magnum [reclusive genius behind Neautral Milk Hotel], they’ve all been really into experimental music for many years. I mean, I’m not really in an experimental scene as most of my friends are. I’m more interested in the pure tones, not so much the music theory aspect. I’m interested more in the strange harmonies, that’s what really turn me on. Like my ear might crave them from time to time like, you know, an avocado or something. Or a fig!”

While it’s good to hear that Magnum is still experimenting with music, like everyone else who had their mind blown by Neutral Milk Hotel’s 1998 swansong In The Aeroplane Over The Sea (which Schneider produced, incidentally), it would be even better news if he’d just pick up a standard-tuned guitar and, just as a suggestion, write some fucking songs.

“I guess I understand,” Schneider laughs. “But for me, him being one of my best friends, I don’t really think about it. It’s just like: OK, he’s not producing songs. But at the same time he’s informed me a lot because I’ve only really ever released pop music.”

And pop music is the plan for Schneider’s Sydney show – which is not to say that he’s actually got that at all worked out either, really…

“I kind of just pull out the acoustic guitar and close my eyes see what song I’ll play and usually I’m able to remember the whole thing and usually it impresses me by the time I’m at the end of it,” he laughs. “Oh, except that at the end of it, it’s always like ‘oh, man‘ because I’m playing acoustically I don’t have a planned ending so you sort of have to come up with something clever on the spot, and then it’s the next song. That’s my plan of action.”

Robert Schneider plays at the Hopetoun on Sat 13 Sep. #1 Hits Explosion is out through Popfrenzy