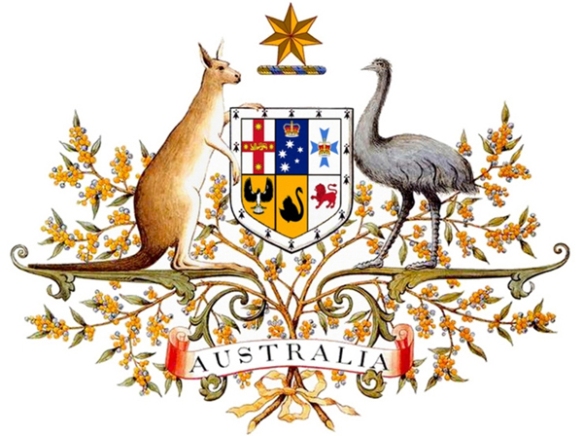 Our national coat of arms, featuring two emblematic creatures that work brilliantly in a curry.

I’m not going to lie to you, friend: it’s been a busy old time.

Something that’s coming up increasingly often because of said column is that I have an anti-Coalition agenda. And that’s not really true: I disagree vehemently with most of the things they’re attempting to do, but that’s because I think they’re pursuing lousy policy rather than because I have a deep-seated loathing of conservatism.

See, conservatives can have good ideas. Progressives are occasionally wrong. The way to establish the quality of a political party’s idea, in my opinion, is to ask the question: does this specific policy contribute to human wellbeing and societal stability?

If the answer is yes, then congratulations: that’s a good bit of policy you have there! If not, then it’s bad policy and should be, at the very least, taken back to the shop for some serious remodelling, possibly with a mallet.

And most of the time it’s pretty straightforward to answer those questions, especially if you bother to ask them in the first place.

So, in order to better understand where I’m coming from, here’s an excerpt from my Here’s The Thing column at TheVine entitled “Governments: Why Do We Even?” explaining that governments are around for a reason, and it’s a pretty great one.

Humans are kinda rubbish at survival on our own. We’re naked and weak and we don’t run especially fast and we don’t have tough shells or huge claws or any of those other things that more robust species have.

One major problem is our big stupid heads, which we need because of our enormous brains. We walk upright in part because that’s the best way to distribute that hefty weight, and walking upright necessitates having a narrow pelvis. Combine narrow pelvises and gigantic skulls and you need to give birth to offspring that are basically fetuses that need a hell of a lot of looking after just to survive. In just about every other species a newborn can fend for itself more or less from birth: human babies are notoriously bad at it.

What we do have – the thing that we’re really, really good at – is working together. Our big brains are great at working out what other people are likely to be thinking, and therefore changing our behaviour accordingly so we can work better together. Lots of animals do that, of course, but we’re amazingly good at it.

About ten thousand years ago we started settling down in places rather than moving around, building permanent settlements and inventing stuff like agriculture as a way to feed a growing mass of people.

Societies started to grow, and the societies where people lived better lives became (understandably) more popular with people than those where things were terrible. Stability brought prosperity, and prosperity bought neat stuff like art and science and culture. Turns out that when humans aren’t living hand to mouth, they have time to think about stuff like “y’know, this shovel could be better designed” and “hey, what do you reckon stars are?”

And that’s also where the idea of laws, and for that matter religion, comes from: a series of rules under which society is stable, and in which the constituents live better lives than they otherwise could do on their own. As this became more codified we ended up with things like governments.

And stability doesn’t sound sexy – anarchy gets a cool symbol and everything – but it’s where where big-brained, small-teethed humans turned things to their advantage. We didn’t have to fight, and we had time to think. And that changed everything.

Once you conclude that governments are in place to maintain the stability that leads to prosperity, it becomes a hell of a lot easier to tell whether something is a great idea or a terrible one. Is society made better by a particular policy? Does it hurt people, or does it help people?

If that’s your criteria, you don’t need to speculate on whether a leader is a good and moral person or not, or whether a party is sticking to their guns or betraying their base or any of those other pointless questions. You can ask “is this specific piece of legislation or policy actually helpful to people?”

That’s the important question, and the challenge for governments is to answer that question with “yes, and here’s why”, rather than angrily insist that their opinion is more valid than evidence.

Speaking of Here’s the Thing, I wrote one today on why we should be protesting the cuts to the ABC. Yes, I really do write a lot.  That’s why I look so tired all the time.