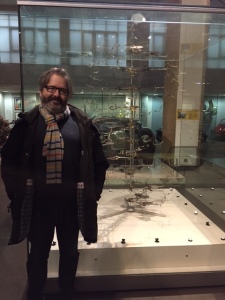 A very rugged up APS beside Crick and Watson’s model of the DNA double helix at the British Science Museum, for which they were to win the Nobel Prize. Not shown: both men stealing Rosalind Franklin’s data in order to do so.

Sorry for the extended silence. I was taking one of those “break” things that people used to take back in the days when our then-strong unions went “what, work all the time until we die in order that others may profit from our labour? Nah.” I recommend such things, as it turns out that not-working for a bit is pretty awesome and inspiring.

This break was not only wonderful, but also incorporated m’delayed honeymoon which involved Europe and seeing all sorts of incredible pieces of art about which I’d read since I was a kid, getting teary in front of the actual fossils that Mary Anning dug from the cliffs at Lyme Regis over two centuries ago, riding many trains, seeing lovely friends and family, getting colder than I’d ever been (cheers, Berlin!), and drinking in some superb bars. And I got to hang out with my wife for three uninterrupted weeks, which was the actual best.

And now we are back in Australia, feeling refreshed and ready to do stuff again – as perhaps indicated by this Daily Life piece I wrote pretty much upon touching down, regarding Australia’s mighty blindspot regarding non-English speaking visitors – but that is not even remotely all!

First up, View from the Street is back for 2016, providing all your lefty ranty column-sized needs at the Sydney Morning Herald and the rest of the Fairfax family (and it is a family) Sunday-Thursday at as close to 5pm as I can manage.

Here are the first two of the year: a bit of a catch up on the dumbest things that happened over the break, and how Eric Abetz confirmed that the government have no intention of respecting the idiotic plebiscite on same-sex marriage, regardless of the result.

Secondly, with The Short and Excruciatingly Embarrassing Reign of Captain Abbott selling out of its first print run – I’m as surprised as you, frankly, but utterly delighted – it’s possibly not a huge shock that I’m now working on another book for Allen & Unwin.

This one’s about my other great love – music, specifically Australian music, and even more specifically some of the weirder things about Australian music that haven’t been given their due. I’ll give more details as things develop, but suffice to say it’s going to be nice to dig deep into something that doesn’t involve legislative breaches of human rights agreements quite so much.

So the ground has been hit running, friends. And if this is the sort of pace that will characterise the rest of the year, maybe another break is in order. Hopefully involving spending even more time at the Science Museum…