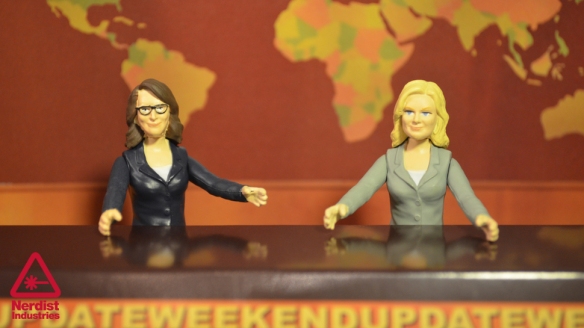 Comedy. It’s an art form that people have strong feelings about, and there is one subject that comes up with tireless regularity. You see it debated in magazine columns and on chat shows, in comment threads and Twitter wars, and it becomes especially prevalent whenever news comes through about a high-profile gig. Like the Golden Globes, for example: rumour has is that last year’s hosts Tina Fey and Amy Poehler are returning to host again, and the predictable “are men funnier than women?” debates have ignited in turn.

And look, I know comedy is a subjective thing and that it seems kind of sexist to argue that one gender is just naturally better than another at comedy – but let’s face it, the data’s pretty unambiguous. I don’t want to be controversial, but seriously? Men vs women? Look, we all know who wears the comedy trousers here.

Fey and Pohler are good examples, in fact: both are writer-performers known for their starring roles in US sitcoms (Fey as 30 Rock’s Liz Lemon, Poehler as Leslie Knope in Parks & Recreation). Much is made of the fact that both come from distinguished comedy backgrounds – Fey as the former head writer of Saturday Night Live, Poehler as co-founder of the groundbreaking improv and sketch troupe the Upright Citizens Brigade.

It’s even more clear when you look at the tightly-contested world of TV, where writer/actors like Lena Dunham (Girls) , Mindy Kaling (The Mindy Project) and Kirsty Fisher & Marieke Hardy (Laid) have brought their own female-centric worldview to the small screen – or, in Hollywood, the likes of Kirstin Wiig, Casey Wilson, June Diane Rapheal and our own Rebel Wilson are creating and starring in their own comedy projects (and don’t even get started on the crop of TV and web series writers like Office staffer Amelie Gillette, or Burning Love creator Erica Oyama.

Stand up comedy’s equally full up: never mind the Margaret Chos or the Katy Griffins, you’ve got the likes of Tig Notaro (who Louis CK has hailed as having given “one of the the greatest standup performances I ever saw” when she walked out on a stage 24 hours after being diagnosed with cancer – the set is on her album Live, which is a verb, not an adjective ), killer Canadian lesbian firebrand DeAnne Smith , or the extraordinary messing-with-form-and-content genius of Maria Bamford. Her line “I never thought of myself as ‘depressed’ so much as ‘paralysed by hope’” is something I want on my gravestone.

And sure, there are also loads of male comics – but seriously, has there ever been a male Joan Rivers? A male French & Saunders? A comic character as perfectly pitched as Ruth Cracknell’s Maggie Beare in Mother & Son? A sitcom as consistently bang-it-out punchline-heavy as The Golden Girls? A more seamless (or successful) transition from stand up to sitcom star to chat show host than Ellen DeGeneres? Hell, what’s the most popular comedy series in this country? A little number called Kath & Kim. What’s a guy got to do in order to break into this total taco fest?

It’s hard to admit, but the facts speak for themselves: there are exceptions, of course, but maybe men just can’t do comedy.

It’s probably because of their hormones or something.