So it’s been a long, long while since I updated this site. And that reason for the silence is fairly straightforward. He looks like this: 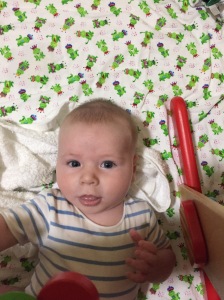 My phone more or less exists entirely as a daily archive of JPS photos these days.

James Peter Street turned up on New Years Eve and has been busy being the best thing in the entire universe. And being awfully distracting from the many, many things his father has to do.

So, if you haven’t been following me on Twitter or Facebook – and you totally can do those things – you might assume that I’ve not been spending the fleeting hours when James is briefly asleep madly writing columns (such as the View from the Street column at the Sydney Morning Herald) and/or doing podcasts. But rest assured: that’s what’s been going on.

(Speaking of which: the next live recording of the Double Disillusionists podcast with m’self and the charming and erudite Dom Knight is at Redfern’s Giant Dwarf on Tuesday 2 May, with special guests Mark Humphries of SBS’s The Feed and the former premier of NSW, Kristina Kenneally! Tickets are on sale now, and if we do say so ourselves it’s going to be a great one.)

But on the subject of writing: I’m working on a book at the moment about Australian music – yes, the one that got mentioned about a year ago, before I got completely sidetracked by The Curious Story of Malcolm Turnbull – and I was wondering… what would you say was the most culturally significant Australian song ever?

Not necessarily your favourite, you understand – but the one that you think either changed things or signified a significant moment in our culture. ‘Treaty’? ‘Khe Sahn’? ‘Friday On My Mind’? ‘Cattle & Cane’? ‘Man Overboard’? ‘Down Under’? ‘Throw Your Arms Around Me’? ‘Shaddap You Face’?

The book, y’see, will be the 50(ish) songs that shaped Australia, and I’ve got a long, long list which I’m still winnowing down. And you, beloved reader, could be part of that process, either by making me feel better about my choices and/or reminding me of something I completely, bafflingly overlooked.

The comments are yours: what are the songs that shaped our nation?

13 thoughts on “What’s the most significant Australian song?”