What made Diamond Joe change from jovial, avuncular goof into angry, sulky goof? We asked Andrew P Street to read the Joe Hockey biography so that you wouldn’t have to. You’re welcome.

Biographers, more or less by necessity, have to fall in love in with their subject. Writing a book is a nightmarishly long ordeal and Stockholm Syndrome must kick in at some point out of sheer self-preservation.

So it’s no surprise that Not Your Average Joe’s author Madonna King is clearly a fan of Joe Hockey and goes that extra mile to spin his successes as mighty victories and his failures as being the fault of lesser men (and always men) who either lack Hockey’s peerless vision or are jealous of his incandescent talents.

The problem is that it all comes across like that friend who talks about the awesome new guy they’re dating, but every single story makes the guy sound like a bullying jerk.

You can just imagine King dishing over a coffee: “Joe was criticised by feminist groups on campus during his election campaign for the University of Sydney Student’s Representative Council, so when he became President he immediately closed the Women’s Room! Isn’t that hilarious?”

“Um, actually, that sounds like he was, at best, being dickishly ungracious in victory and at worst putting women at risk by eliminating a safe space for them on campus,” you would hesitantly reply.

“Oh, you just have to get to know him!” King would presumably respond with a dismissive guffaw. “It’s just his sense of humour! Like when he claimed he’d signed up 80 new members to the local branch of the Liberal Party on the North Shore and now admits that he mainly just added the names of dead people to the register and was never caught – I mean, what a caution!” 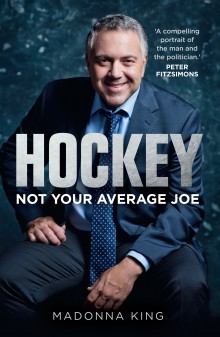 These days this cover is the entire dictionary entry for “hubris”.

Not Your Average Joe is not just a collection of heart-warming tales of revenge-misogyny and voter fraud; it’s also the story of how one deeply insecure young man grew up to become the most deeply entitled and self-aggrandising treasurer Australia has ever known – which, in a field that includes such avowed Paul Keating fans as Paul Keating, is no small achievement.

Put bluntly: why the ever-loving fuck would a man in the first year of his job say yes to the writing and publication of his biography unless he was a) utterly assured of his importance and felt there was a genuine need to capture this historic moment, or b) knew in his heart of hearts that no-one was going to remember what a Joe Hockey was after the next election, and possibly by mid-way through the current government?

The answer, told time and time again in the book, is a). Joe Hockey wanted to be PM since he was four, we’re assured. Everyone – from his unshakably supportive father to his indulgent schoolteachers to his mates on the rugby field – repeatedly and unceasingly assured him that he would be PM. The fact the wanted it when he was a preschooler indicates that his desire for the role predated having any idea what that role actually meant. This is primal gimme-I-want stuff, not a cool-headed dedication to public service.

That theme – unshakable entitlement – is what comes through time and again through the book. When he’s successful, he gloats. When he fails, he explodes.

An illustrative example is that before he was the first to be eliminated in the three-horse Liberal Party leadership spill in 2009 – the one that toppled Malcolm Turnbull and installed Tony Abbott as leader in opposition – he was so assured of his own victory that he didn’t even bother to call MPs and lobby them for their vote, as Abbott was comprehensively doing.

“That feeds the view that he has this destiny thing where he should get things easily,” said one unnamed ‘senior Liberal’, echoing the opinions expressed elsewhere by John Howard, Peter Costello, Peter Dutton, Nick Minchin and practically everyone else.

Needless to say Joe sees it rather differently.

He didn’t lose the vote: he was betrayed by Turnbull, who assured him he wouldn’t run (despite having declared his intention to do so on television a mere two days before the vote, and who gently suggests in the book that Joe’s version of events exists entirely in his own head) and by Abbott who had pledged to support Hockey (who changed his mind after they argued over giving a free vote for the Turnbull-and-Kevin Rudd-endorsed Emissions Trading Scheme).

Among the other people that Joe accuses of betraying him – in a book written by a sympathetic author who even fills several pages singing the praises of the universally loathed WorkChoices – are the following people:

Howard (for giving him bad advice about pushing for a free vote on the Emissions Trading Scheme), Costello (for not supporting his desire to be finance minister), Minchin (for backing Abbott after earlier supporting Joe), Rudd (for asking Hockey’s advice on how to be opposition leader and then applying it), Ian Macdonald (for criticising Hockey as senior tourism minister), Family First’s Steve Fielding (who agreed to a free vote on the ETS, according to Hockey, and then announced on TV that he didn’t), and pretty much everyone else.

He also gets some stories in about cool Terminator-like quips he made to the faces of Howard and Turnbull during arguments, which both men politely deny ever happened, lending weight to the idea that Hockey is first and foremost a fabulist convinced of his own greatness.

It’s at times a genuinely sobering read: much of the first act of the book covers Joe’s childhood and education, painting the picture of an isolated little boy carrying his self-made immigrant father’s dreams of greatness on his shoulders, teased for his size through school (gaining the nickname “Sloppy Joe”) and looking for camaraderie through sport, cadets and finally politics.

It’s also implied that Joe wasn’t exactly a hit with the ladies. It doesn’t help that his wife, Melissa Babbage, comes across in the book as the least sympathetic spouse since Lady Macbeth.

The enormously successful and mightily wealthy investment banker met Joe at a Young Liberals function and every quote in the book suggests that she quickly assessed him as a sound, if undervalued, investment and engineered a matrimonial merger, speaking of their courtship and marriage as though they were necessary obligations to be overcome rather than the glorious unfolding of a love to last through the ages.

Mind you, he did allegedly propose to her while accompanied by a violinist playing music from The Phantom of the Operawhich suggests that romance and creativity aren’t big concerns of Joe’s either.

The art of the hubrisography is a rich and noble one – why, right this minute I have two music bios on my shelf, David Barnett’s Love and Poison: the authorised biography of Suede and Tony Fletcher’s Never Stop: the Echo & the Bunnymen Story, both of which have penultimate chapters in which the respective bands express their boundless optimism for their rosy, hit-filled future which are followed by an immediate pre-publication epilogue essentially reading “…and then they split up.”

In a similar spirit, the book ends with King mentioning that Joe was photographed having a cheeky cigar with finance minister Mathias Cormann just after delivering his first triumphant budget, and then suggests, as though in passing, that it remained to be seen how it would be received – which is sort of like writing a biography of Austria that ends in 1914, mentioning that Archduke Franz Ferdinand had just been assassinated in Sarajevo and idly speculating as to whether there’d be any sort of official response.

One of her closing sentences, though, was meant to reiterate how much Joe and Tones are BFFs these days, but now has a somewhat ominous tinge as they both grow increasingly testy over who is failing to win the nation’s hearts and minds: “Barnaby Joyce, who like Hockey is one of the government’s best retail politicians, says the two will rise and fall together.”

That may prove to be the most accurate line in the entire book.