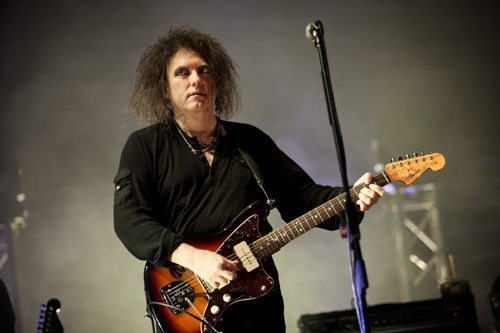 The Cure soundcheck at Vivid Live: pic by Daniel Boud, who is a freakin’ photography legend-genius: http://danielboud.com/

First up: if you’re going tonight, stop reading now. There are some spoilers to come regarding the setlist and I don’t want to ruin the surprise. “But APS, the show’s their first three albums: I know what the setlist is.” No, you really don’t. Stop reading – but just know you’re going to have a very, very good time. Oh, and that you should take the toilet breaks when they’re offered. You’ll thank me.

Still with me, rest of you? Let’s press on.

This show, nice Vivid Festival surprise that it was, seemed to be an odd decision on the Cure’s part. With the best will in the world, and acknowledging that they do have some genuinely classic albums, their debut is… well, a bit shit. Robert Smith acknowledged as much at the time, fuming that manager/producer Chris Parry put Three Imaginary Boys together from sessions Smith was unhappy with, and it never even got a proper release in Australia with Polygram opting instead for the superior best-tracks-from-Boys-plus-singles-and-b-sides mish-mash Boys Don’t Cry.

Yet here is Smith, flanked by his long-time rhythm section of bassist Simon Gallup (1980-1982, 1985-present) and drummer Jason Cooper (1995-present), neither of whom played on the album. How would Cooper handle Lol Tolhurst’s enthusiastic-yet-unschooled drumming? How would Gallup take on Michael Dempsey’s fiddly basslines?

The answer, it turns out, is they don’t even try. Cooper stuck with his trademark straight-ahead drumming (either “solid” or “dull”, depending on your inclination) and Gallup (looking inexplicably good for a 50 year old) tended to stick to the root notes. And you know what? It worked.

The set began with the classic ‘10:15 Saturday Night’, then the band slowed down the fidgety ‘Accuracy’ to great effect and the crowd went nuts for ‘Grinding Halt’. And that’s the song that really showed off the sort of Jam-style power-trio the Cure were then, even as the following – the stately, economical ‘Another Day’ was probably the clearest indication as to what was coming on the next few albums. And Robert was in playful form, explaining “I don’t really like this one” before the misogynist thrasher ‘Object’ before busting out harmonica for the terrifying side-one closer ‘Subway Song’.

Side two, a couple of classics aside, is mainly a garbage dump. It never sounded better, though, as the trio powered through the punky cover of ‘Foxy Lady’, ‘Meathook’ and the absolute throwaway ‘So What?’ (“I’m amazed I remembered as much of that as I did”) before the first of the redeeming moments: ‘Fire in Cairo’, with Smith trying to cover both his and Dempsey’s riffs since Gallup wasn’t up to the job. Then it was ‘It’s Not You’ (‘Object’ again, effectively) and the magnificent title track, and that was that. One album down, and a break for the bar.

The stage was reset for Seventeen Seconds, with keyboardist Roger O’Donnell (who joined in 1987, left in 1991, came back in 1995 and was dismissed in 2005) joining the aforementioned trio. The instrumental ‘A Reflection’ acted as the perfect curtain-raiser before one of the band’s enduring classics: ‘Play For Today’ with pretty much the entire audience singing along with the keyboard riff. ‘’In Your House’ was downright magnificent and ‘At Night’ haunting, and everyone went freakin’ nuts when O’Donnell hit that opening A that heralded the beginning of ‘A Forest’. A superb set, and that’s two albums down.

And so on to Faith, with the Cure’s co-founder – the aforementioned Tolhurst – sharing a stage with Smith for the first time in 22 years after a post-band relationship that could be described as “colourful” (and also, “litigious”). From the second that ‘The Holy Hour’ began the sound was massive, with Gallup’s bass hitting the room in the collective solar plexus, although Tolhurst’s role seemed to be resticted to “busy work”: the former drummer and keyboardist was left on auxilliary percussion for the most of the set, although he did hit the keys for ‘All Cats Are Grey’ and the title track. And his work wasn’t flawless – his messy rototom rolls did little to enhance ‘Doubt’, for example – but dear god, it was good to see him on stage.

So yes, three albums, all sounding great. And then the encores began.

You know how the Pixies pulled out their contemporaneous b-sides when they did their Doolittle show? Well, basically, that: the three-piece version kicked out ‘World War’ and – dear god! – ‘I’m Cold’ and ‘Plastic Passion’ before Roger and Lol joined for a triumphant ‘Boys Don’t Cry’, ‘Killing An Arab’ and, possibly best of the night, ‘Jumping Someone Else’s Train’ (and Gallup actually played Dempsey’s bassline, bless him) which segued into its b-side ‘Another Journey By Train’, and they left the stage. The perfect end to a genuinely wonderful night.

And then the crew brought a new setlist out.

And then the band returned with (mainly) instrumental b-sides ‘Descent’ (Smith quipping “not even we know this one”) and ‘Splintered in her Head’, before going into a triumphant version of non-album single ‘Charlotte Sometimes’ and Pornography’s lead single ‘The Hanging Garden’.

“What a perfect way to cover off that entire period, ending with the precursor to the fourth album,” I thought. “That’s pretty much every song they recorded between 1978 and 1981.”

And then the crew brought another setlist out.

And then, friends, the moment which I had been waiting for since becoming a Cure fan at age 10.

The. Cure. Played. The. Fantasy. Trilogy.

See, between the punky-goth band they were and before the pop band they were to become came three transitional seven inches in the early 80s, which were the three songs with which I fell in love: ‘Let’s Go To Bed’, ‘The Walk’ and – and you should probably sit down at this point, although no-one in the Opera House did – ‘The Love Cats’.

It was glorious, playful, joyous, and when Smith fucked up the ‘Love Cats’ bridge he recovered by pointing at himself and asking the crowd “How could you miss someone as dumb as this”?

It’s a memory I’ll be taking to the grave.